WITH FRESH EYES: Winner of the ECPA Christian Book Award and the Selah Award. Get your copy here.
Home / Grace on Parade / Stale Communion

“Does Communion ever lose its meaning for you?” 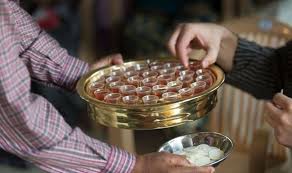 I belong to an assembly that practices weekly communion. Friends belonging to denominations where Communion is served only once a month or twice a year often question our attitudes toward Communion, wondering if it ever becomes rote or meaningless to us.

This week, our participation in the Lord’s Supper reminded me once again that no, it never becomes old or stale.

First, it’s good to remember that I observe Communion, not because of the feelings it invokes but because my Lord told me to do it. The Bible says that as often as we partake, we do it to remember Him. Whether or not I’m thinking lofty thoughts right at the moment of consumption, overall I’m still doing it to remember Him. That’s reassuring in those odd moments when I’m distracted at the very moment I accept the tray while I’m looking for a full cup or passing it to the dear older lady next to me whose arthritic hands risk fumbling the heavy tray.

The Bible also says that when we take Communion, we are proclaiming the death, burial and resurrection of Christ. If an un-believer or better yet, a hostile un-believer walked into our assembly during the Communion service, my very act of lifting the bread and cup to my mouth would signify to them that no matter what is going through my head at that instant, I believe these things. My act of participation means something to others.

But to get back to the original question: does Communion lose its meaning for me?

God is the judge of individual hearts. I cannot speak for everyone. If there are some who don’t approach Communion with a proper attitude, that’s not a valid reason to take Communion less often. That just means there’s some folks who need to work on their attitude. Including me. Preparation for Communion, for the entire worship service, starts Saturday night, during Sunday breakfast, in the car on the way to church. It’s a multi-moment preparation as I leave the frayed moments of my past week behind so I can concentrate on the Lord. It might also mean church leadership needs to do a better job of presenting it, of stirring our minds and memories to focus on the reason we assemble together.

Our particular congregation has the practice of various men giving a devotional thought before we participate in the Lord’s Supper service. The passion and earnestness of these men help prepare my heart and stir my thoughts. Sharing from the depths of their relationship with God, they remind me of the importance of the ceremony Jesus established to help his followers never forget the monumental thing he did for us. Twice in the last year, I’ve seen grown men cry as they have sought to express how deeply grateful they are for what Christ has done for them. 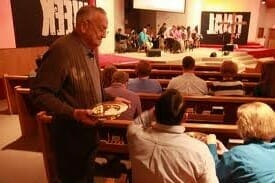 Rodney told how important it is to hear his loved ones say the words, “I love you” to each other, how deeply meaningful it was to hear his adult son say those words to him. Barely able to speak through his emotion, Rodney told how Christ’s death on the cross was his way of saying, “I love you.” Communion then becomes our chance to tell Jesus, “I love you too.” “We can never tell our family ‘I love you’ too often,” Rodney said. “It’s the same with Jesus.”

Mike opened his Communion devotion by telling us about the day his mother died three weeks ago. Mike had hardly talked publically about his mother’s death, yet within his Communion meditation, he shared how he and his sister were carrying flowers and other personal effects out of the hospital. A woman in the elevator said, “Looks like someone is going home today.” Coughing several times to control the tears, Mike said, “The woman didn’t realize the depths of the truth of her words.” Communion, he explained, was a celebration of the fact that believers look forward through the death and resurrection of Christ to that eventual homecoming. “It’s a time to remember once more,” Mike said, “that someday we get to go home.’

Yes. Communion means something. It means a lot. Every time.