WITH FRESH EYES: Winner of the ECPA Christian Book Award and the Selah Award. Get your copy here.
Home / Grace on Parade / Together: Combining Limited Strength To Get The Job Done

We need each other.

Apart, we are weak. Together we are strong.

Solomon was right when he said,

“Two people are better off than one, for they can help each other succeed.” – Ecclesiastes 4:9

I learned what Solomon meant during a Communion service.

A month after surgery for a torn retina, I scooted into a pew one Sunday morning next to Anne. For months, as my vision deteriorated, three other women had pointed me toward the full Communion cups I could not see. But my three faithful friends weren’t there that particular Sunday morning. Anne’s husband, recovering from a long illness, was also absent. My husband was in the front row, preparing to preach.

Two women without their husbands. Sitting next to Anne sounded like a nice thing. It was, until time for Communion.

Then it hit me. What was I thinking? Anne has rheumatoid arthritis so bad, her stiff fingers curl into her palms. She was the one who needed help. She needed more help than I did, more help than I could give.

So I proceeded to make matters worse by turning to Gloria who was sitting behind us. Gloria’s husband had to work that morning. She was barely there herself due to an intestinal flare-up. Without argument—it was in the middle of the Communion service, after all—she scooted into the pew on the other side of Anne.

Between the three of us, we got ourselves Communion. 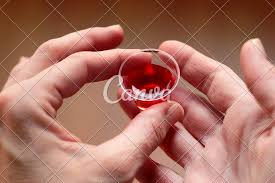 I wasn’t put together enough to help Anne like I wanted to. Like I should have been able to. Anne couldn’t help me in the way I needed it. Gloria lifted weak hands to help both of us. We combined our partial strength to get the task accomplished. Together, we gave of what we had to serve each other.

So often, I’ve wanted to refuse a job because I wasn’t good enough, strong enough, smart enough, or experienced enough. In God’s economy, prowess and perfection are so irrelevant. He never intended to choose only perfect people to do His work, because He’d be hard pressed to find any perfect people. We do the best we can with what we have. Even the most adept among still lack something. We need each other to get any job done. We need to work together.

Think of it this way. Belaboring what you don’t have will definitely slow your progress toward success.

“It is not the critic who counts;
Nor the man who points out how the strong man stumbles,
Or where the doer of deeds could have done them better.
The credit belongs to the man who is actually in the arena,
Whose face is marred by dust and sweat and blood;
Who strives valiantly;
Who errs, who comes short again and again,
Because there is no effort without error and shortcoming;
. . .
And who at worst, if he fails, at least fails while daring greatly,
So that his place shall never be with those cold and timid souls who neither knew victory nor defeat.”

We focus not on what we don’t have, but what we do have. We give of what we have.

And when we do give of the little that we have, Jesus promised, He’d fill in the rest in such great amounts, we wouldn’t be able to contain it all.

“Give, and it will be given to you. A good measure, pressed down, shaken together and running over, will be poured into your lap. For with the measure you use, it will be measured to you.” – Luke 6:38

Gloria, Anne, and I were not at our best that Sunday. We had depleted our reserve of strength just to get there. What little we had, we gave to each other. As we each held an edge of the Communion tray, we realized the sweet victory of overcoming our weaknesses in order to put God first and meet with His people. We realized He came to save us so He could restore our strength, bind our wounds, and make us whole again.

All of us are the guardians of strengths and weaknesses.

That’s why Paul referred to the Church as a body, each part doing its part. God doesn’t expect any of us to be all things to all people. If I’m a foot, I’m not supposed to be able to do the job of a hand, mouth, or eyes. That’s someone else’s job. We work as a team for the good of all.

Three physically limited women sharing a Communion tray is a microcosm of what God’s body, the Church, does all the time. I like to think of our Christian community as one big jigsaw puzzle. Where I am weak, others are strong. Your ability fills in the skills I lack. We fit together to make a beautiful picture for God. Anyone observing the final picture is hardly aware of the curves and wedges that represent our differences.

Put aside your pride and swallow your discouragement over what you can’t do. No matter how small it might seem. you have something to offer  and others have something they can give you. Offer it to the Lord. He’ll combine it with the partial offerings of everyone else, mix it, create it into a beautiful work, and do great and mighty things through His people as a whole.

One more thing that Communion service did for me that precious day I shared it with Anne and Gloria. It was a poignant reminder that we are all spiritually broken, dependent on a Savior’s love to pull us toward the healing only Jesus can offer. Because of what Christ did for us at the cross, we have the hope of complete renewal on the other side of eternity. Someday, because of Christ’s sacrifice at the cross, three women who once balanced a Communion tray between them will dance together in the streets paved with gold and praise the One who completely heals body, mind, and spirit. And their cups will overflow with joy!