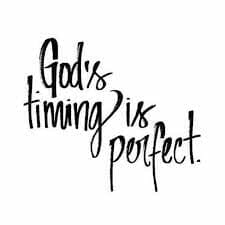 You’ve heard it. I’ve said it. Sometimes we don’t want to hear it.

We want whatever we want right now. Right now would be perfect.

Yet, God, in His infinite wisdom, knows the best time to bring His work to completion. That moment, however, may not necessarily occur in our lifespan. He may want to save his work through us for the next generation, maybe even  for a generation several millennium, in the future. God may not reveal to us His perfectly planned timetable until eternity. Perfect, appropriate, and beautiful.

That’s what Solomon said. God makes all things beautiful in His time.

The work of the Essenes at Qumran located northeast of the Dead Sea remind me of God’s perfect timing. An Old Testament monastic group dedicated to preserving and obeying the Word of God, the Essenes lived in remote areas, separated by choice from all societal pleasures. They retreated in order to distance themselves from the distractions of Hellenism (the Greeks), the worldliness of Temple life, and the corrupt, liberal thinking of the Pharisees and Sadducees. They spent their days reading, living, and copying the Word of God.

Archeologists unearthed evidences of their labors in the ruins of a Scriptorium, a library room equipped with benches and even inkwells. Evidently the scribes of the Essenes hid their copies of the Old Testament and other Jewish literature in nearby caves overlooking the Dead Sea, probably to hide them from the invading Roman army. We don’t know exactly when the Essenes abandoned their community but it could have been about the time of the Second Jewish War in 66-73 A.D.

A Bedouin shepherd, trying to lure a wayward goat out of a cave, threw a rock at the entrance rather than climbing up to the cave. Instead of hearing the ping of rock against rock, or a protest of complaint from the goat, the boy heard shattering pottery. That is not what he expected to hear. So he went to investigate. What he found bust open the door to modern Bible translation and turned upside down the world of liberal theology. He had discovered the Dead Sea Scrolls. 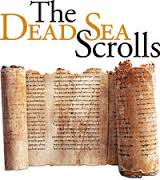 These leather and parchment scrolls, hidden in clay pots with dome shaped lids, comprised portions of every single Old Testament book except Esther. Here’s the interesting part to me. The most intact scroll was Isaiah, the book that contains many prophecies about the coming Messiah. Why does that fact stand out to me?

During the early twentieth century, liberal theologians cultivated a growing skepticism toward Old Testament prophecy. They alleged that Isaiah was written after Jesus’ life, not before. A very good fiction writer must have collected all the facts about Jesus and made up all those prophecies. That was the only way to explain all those minute details about Jesus given in Isaiah.

If theologians were able to debunk the date of Isiah’s writing, prophecy as a whole would be in question and Jesus’ claims to be the Messiah were no longer credible. Prophecy exists to validate who Jesus said He was—the Anointed One sent from God. Casting doubt on prophecy reduced Jesus to a mere man, one more leader of one more world religion.

The Dead Sea Scroll of Isaiah was without a doubt, copied long before Jesus ever came to this earth. It was by far the oldest available manuscript available to Bible translators by over a thousand years. Even the theologians could not contest the authenticity of this ancient scroll.

I find it interesting, no, amazing that the Dead Sea scrolls were found at the height of the controversy over the authority of the Scripture and the identity of Christ. 1947 also stood at the brink of the technological revolution. In ensuing decades, man would have the technological capability to study, date and preserve the documents in ways like no other time in history. If man had discovered the scrolls even two centuries ago, they would not have had the tools to preserve and protect their find. Today, the Isaiah Scroll and many of the other fragments reside in the Shrine of the Book in Jerusalem in a perfectly controlled climate.

Two millennia ago, unknown scribes labored to preserve the Old Testament, work that would be concealed until just the right moment in history. They didn’t do it for themselves. They did it for others. God would determine who those others would be.

What are you waiting for God to do?

Grow your church? Allow you to publish a book? Bring success to a program you want to implement? When we relinquish our lives to God’s service, our lives and our work are tools in His hands. We become a part of a much larger work. While we would prefer to see the results of our labor, we will most likely not see the final outcome until the day of Christ.

Think of the tools needed to build a house. At the beginning, a plumb line is used to set the foundation. A hammer pounds nails into the outer structure. A paint brush applies paint, and a screwdriver affixes screws into kitchen cabinets. Once the hammer has completed its job, it would be silly for the hammer to say, “The house isn’t done! I’ve failed to complete what I set out to do.” No. The hammer’s job is done. It is time to set aside the hammer so the paintbrush and screwdriver can do their part.

Old Testament heroes didn’t get to meet the Messiah they waited for and prophesied about. They lost much. Yet they kept believing, proclaiming, and suffering for that belief. Hebrews 11:39,40 says:

“And all these, having gained approval through their faith, did not receive what was promised, because God had provided something better for us, so that apart from us they would not be made perfect.” (NASB)

So it is with our work for Christ. We may never see the fruit of our efforts in our lifetime. We may not witness the results of our calling. We may feel like our lives haven’t mattered and we haven’t accomplished anything worthwhile. We must trust that at the right moment, God will use what we’ve done to merge it with whatever everyone else has accomplished and reveal His glory at just the right moment.

“Yet God has made everything beautiful for its own time. He has planted eternity in the human heart, but even so, people cannot see the whole scope of God’s work from beginning to end.”

Although we cannot see the scope of God’s work, we need to remain faithful to what He calls us to do. We turn the rest over to Him and the next person in line, trusting that God will use our efforts for the greatest good at the best moment. While the Lord may give us glimpses of His power at work within us, it’s very conceivable that He may have bigger plans for our work that go far beyond our lifetime.

Just like the work of the Essene scribes who produced the Dead Sea Scrolls.

Previous Post: « Family of God: Church Should Be A Place To Call Home
Next Post: Together: Combining Limited Strength To Get The Job Done »