WITH FRESH EYES: Winner of the ECPA Christian Book Award and the Selah Award. Get your copy here.
Home / Grace on Parade / Family of God: Church Should Be A Place To Call Home

I am so glad I’m a part of the Family of God.

Forgive me if I sound cliche. It isn’t intentional. Yes, I know. That’s a line from a song penned by Gloria Gaither over forty years ago. I mean it sincerely. I’m really am glad to be a part of my church family.

You see, church isn’t a building. It’s not a meeting, a religious discussion group, support group, or community. It goes deeper than that. We be family.

It’s a biblical idea. Throughout the New Testament, Paul talks about how we are adopted, joint heirs of the promises, God is known as Abba Father, and we are children of the Heavenly Father. Paul often calls his readers Brethren in the King James Version of the Bible. Don’t get hoodwinked on the gender issue. It’s a catchall Greek word that includes us gals as well. The point is, If God is my father, and I’m His daughter, then I am your sister. We be family.

Church family goes deeper than biological family. In the church, we share in common something at the very core of our being—our faith in Christ. We may have all kinds of other differences, but that fact alone can unite the most diverse of groups.

That’s the way Jesus intended it to be.

In the prayer he prayed right before his arrest, Jesus asked that his followers would be of one heart and mind. Paul told his readers that two things would completely satisfy him: if church members were like-minded and  they would look out for each other.

When your own family doesn’t share your values or faith, or when they live far away, your church family is there for you. Who else in society would visit you when you are sick, bring food when there’s a death, pray for you even if they don’t know you well or at all, greet you on the street, ask more than how are you, and listen when you tell them. Who else cares not just how you are today and what’s happening in the rest of your life, but where you will spend eternity as well.

It gets more personal than that.

One Sunday, our youth minister’s not quite two year old son came to Sunday service with a cold. As I sat at an information booth, I looked off to my side. Two older women bent over at the waist, leaning over the little boy. One was examining an owie on his finger. The other held a Kleenex. “Let Grandma Amy and Grandma Nancy take care of that runny nose,” she said. It was wonderful! I wish I’d had my IPAD handy so I could share the memory with you. That’s about as personal as it can get.

Two women, so comfortable with the little boy who was nowhere near their biological relative, that they were willing to wipe his nose. They didn’t say, “Have your mother wipe your nose.” They didn’t mutter behind their hands, “Why doesn’t that mother take care of her child’s nose? Why did she even bring him to church, exposing us to his germs?” They knew Mom was busy somewhere else so, just like Grandma would do, they took care of the problem and threw a little loving in for good measure.

It made me think of our ministry in Kansas. Living far from family, we felt bad our girls didn’t have the influence of grandmas. My husband and I were on the move the moment our feet hit the church building threshold, and often, there was no church nursery. So we solicited “Grandma-friends” for our two girls. Each girl quickly gravitated toward one special friend. Soon, Katherine was walking Grandma-Friend Violet to her car each week. Christine sat with Grandma Pat wearing the beautiful velvet lined dress Pat gave her for Christmas. When we had to make an emergency trip to visit a church member, Vernie and Virginia gladly stayed up till midnight to watch our children for us. Vernie was known by the children of the church as “The Candy Man” because his pockets were always filled with treats for the kids.

The church in Kansas didn’t monopolize the family-friendly church market.

Mid-March one year, Gloria, a member of our current congregation, collapsed on the floor of her living room. Her femur bone had snapped. For three months she endured agonizing pain and excruciating physical therapy. Two months later, I fell in a hotel parking lot, chipping my ankle bone and gashing my head above my eyebrow. Mid-July, Gloria and I decided we both needed to attend a water aerobics class at the YMCA in the town north of us. My house was en route from Gloria’s house to the Y so Gloria would pick me up and we went together. Quite often, we’d go out for coffee or go grocery shopping afterwards.

One day, as we were leaving, someone asked, “Are you two sisters?” We smiled. I think one of us answered, “Might as well be.” We’d spent so much time together that we talked as easily as if we were sisters.

Another woman fell in her shower and hurt her back while she was getting ready for Sunday worship. As soon as Jack finished his Sunday morning duties, he and I hightailed it to the hospital. Jack explained to the receptionist that he was the minister at the woman’s church. The receptionist had a crooked smile. “Someone from your church has already been here.” What a testimony to the church as a family. I love it!

Unfortunately those get the bad press from outsiders. Come on. Families squabble too, a lot worse than church conflicts. Ask any police officer who has had to deal with domestic violence. And the church is still made up of human beings who haven’t quite reached the perfection of Christ. Yet the moments of church members supporting each other, loving each other, taking care of each other, and having fun together—those might not make news headlines but they far outweigh any scandalous news of Christians behaving badly. 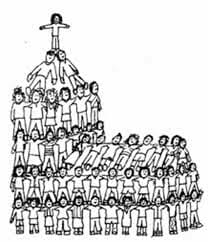 They may not broadcast it, but the world does notice those good moments. How often I’ve heard new members tell  how a kindness from a church member influenced them to join the church membership. More than one family has expressed the sentiment, “I felt like I’d come home.” People are watching and longing for what we have. While mega-sized churches have received tremendous popularity over the last twenty years, their appeal is starting to wane. People are starting to drift back to the smaller church. Why? They miss the family atmosphere.

If church is family and we can have that kind of impact on the watching outsider, then let’s get along as family the very best we can! Let’s be the best of family life. Even if it means wiping the nose of a two-year-old little boy, hugging a frail 90 year old woman, or sharing an exercise class and praying together with a sister in Christ in the YMCA locker room. Let’s show a lonely, disconnected world that church is the very best place to be.

“Church should be a place to call home.”