WITH FRESH EYES: Winner of the ECPA Christian Book Award and the Selah Award. Get your copy here.
Home / Grace on Parade / Trusting Jesus 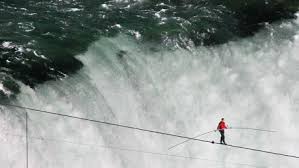 The story is told of a man who bragged that he could walk across a tightrope spanning Niagara Falls.   With some skepticism and ambivalence, spectators gathered to watch him.  The man walked across the rope as if he were walking down the street.  But the crowd was ho-hum.  Any circus performer can walk a tightrope. Right?

“I can do cartwheel’s across the tightrope,” the man claimed.  Now intrigued, the crowd watched more closely.  Indeed, the man did just that, perfectly, never slipping once.

The man did a series of gymnastic stunts, each time wooing and wowing his audience.  Finally, he got a wheelbarrow and to the utter delight and astonishment of the crowd, wheeled the barrow across the tightrope stretched over the mighty falls.

“You can do anything on that tightrope,” several cried.

“Yes! Yes!  You are wonderful, awesome, fantastic.  You can do anything on that tightrope.”  The crowd proclaimed the wonders they had seen.

“All right,” the man said.  “Who would like to get in the wheelbarrow?”

Jesus walked on water.  Jesus stopped a storm.  Jesus provided such a huge catch of fish, one boat almost capsized.  The storms of humanity put him to death, but he popped back to life.  Wow!  Jesus can do anything.

So, are you willing to get in his boat?

Maybe our problem in trusting Jesus enough to let Him be in charge  isn’t with him – it’s with ourselves.  I’m too unimportant, I’m too sinful. You don’t know my past.  Jesus wouldn’t want to ever bother with me. Why would He want me in His boat anyway?

Jesus’ love is as strong and far-reaching as his power.  He accepts everybody. During his earthly life, he was  willing to be friends with anyone.

Through his love, acceptance, forgiveness and power, he changed their lives.

If he can do it for them, he can do it for you – whether or not you have yet  taken that initial step of faith to become  his own, or, claiming to belong to Him, you’ve only dabbled with trusting Him.  You still hold back, not convinced, afraid He might let you down, afraid of being out of control of your own life.

I’ve learned that trusting Jesus once at the point of salvation isn’t enough.  Every morning, several times through my day, I have to make the decision once again which way I trust most – His way or my way.  No wonder Christ challenged his followers in Luke 9:23 to take up their crosses daily.  Belonging to Jesus is a daily decision  to leave my cloistered corner and step out into the unknown, reaching for His strong hand.

Jesus is able and willing to carry you over any treacherous waters.

And from His arms, the view will be beautiful. 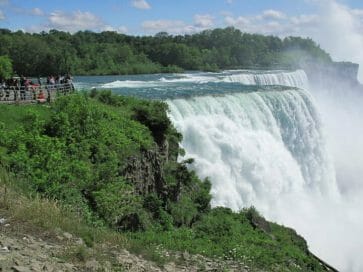 So, do you want to get in His boat?