WITH FRESH EYES: Winner of the ECPA Christian Book Award and the Selah Award. Get your copy here.
Home / Grace on Parade / V Is For Vase

It took awhile but I’ve got my husband to like flowers too.  He was the type of man who thought flowers were a waste of money because they didn’t last.  He thought gifts should be more permanent.  Flowers stick around longer than a dinner out, I’ve told him. 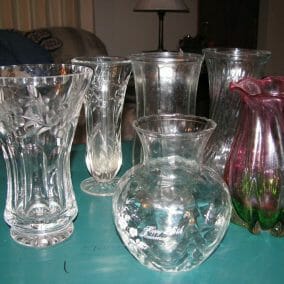 I started to agree with him about the uselessness of flowers when the flowers died and I was left with the vases.  What was I supposed to do with all those vases? Even though I didn’t get flowers very often, it didn’t take long for my china cabinet to look like a flea market display.
Then I discovered flower bouquets at Walmart and my local grocery store. I would buy the bouquets and stuff them in my own vase.

I also learned in my marital maturation, that if I want something I can’t expect him to read my mind or remember the last time.  I need to just tell him what I want.

Once, after, ahem, a particularly rough week in our relationship, I thrust some flowers into his hand at the cash register at Walmart.  “You need to buy these for me.”
He had that clueless look on his face. “I do?”

He lay them on the counter. He was starting to get it. “My wife says I need to buy these for her,” he told the cashier.

“Then that’s what you need to do,” she replied.  God bless her.

I have a friend who, after her divorce, bought flowers each week for herself and her little girl through the bleak midwinter.  It added beauty and color to an otherwise gray and miserable time in their lives.  I started to pick up flowers on my own, especially during more stressful periods in our lives.  A bouquet graced our table when we had guests over.  We placed a vase of flowers in the guest bedroom when she came home for a weekend visit after a grueling semester of medical school. Flowers softened the stress and reminded us that God’s world was still beautiful.

This year, I discovered the ultimate.  Disgusted with the wilted, unnatural looking dyed flowers at my local Walmart, I decided to check out my local florist.  How much more would it cost there?  I had an inspiration.  I took one of my vases to her. “I want some flowers but I don’t want to spend any more than ten dollars.  Could you fill my vase with ten dollars of flowers?”  I asked.

“No problem,” she said.  “Just give me a half hour.” Her creation was far better than any efforts of mine to stuff Walmart flowers into my vase.
We’ve done that several since.  Sometimes Jack will surprise me.  Sometimes both of us will get the hankering for fresh cut flowers at the same time.  It’s our little way of enjoying something together.

This morning, we did it again.  I sent Jack off with a list of errands and before he walked out the door, I handed him a vase, a Christmas vase from last year.  “Can you stop by the florist and get some flowers?”

Here are the results.  Aren’t they pretty? 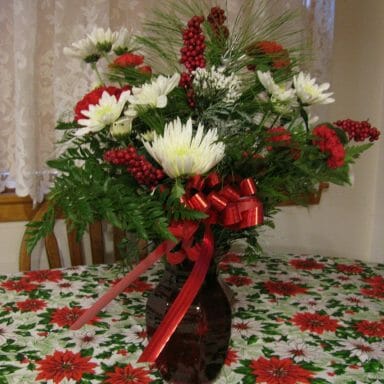 My two daughters are arriving home for the holidays in a few hours.  I hope to greet them at the door with the scent of a homemade supper, the feel of my arms around them and the beauty of fresh flowers.

It’s a blog hop from A to Z and this week is the letter V.