WITH FRESH EYES: Winner of the ECPA Christian Book Award and the Selah Award. Get your copy here.
Home / Grace on Parade / Why Are You Going Back?

Jesus said in his Sermon on the Mount that we should love our enemies, pray for those who persecute us (Matt 5:44), and turn the other cheek when others strike us (Matthew 5:39). Missy displayed this grace when she got fired from her job as assistant manager of a grocery store.

For years, Missy worked at our little hometown store, doing every job there was to do. In spite of her hard work, her employers cut her hours, cut her pay, took from the till then accused her of stealing, and dumped the jobs they didn’t want to do on her. We encouraged her to quit but responsible, dependable Missy refused. “They need me,” she said simply. 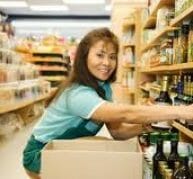 Finally, things came to a head. The owner told her to get out and she did. God provided for her. Within a month, she had a new and better job where she was loved and appreciated.

Then she got the news. Her boss’ son, who had also worked at the store, had dropped dead of a heart attack. Without pay, still the target of criticism, Missy went back to the store for two weeks to help train a new manager.

Many of us, including me, questioned her sanity. Why would she willingly go back into the lions’ den to suffer more abuse? But when I thought about it more, I realized Missy was displaying God’s grace – giving those people a gift they didn’t deserve.

After all, isn’t that what Jesus did for us when He came to earth and died on the cross?