WITH FRESH EYES: Winner of the ECPA Christian Book Award and the Selah Award. Get your copy here.
Home / Grace on Parade / Intimate Grace: The Woman Caught in Adultery

Should the story of the adulterous woman in John 8

be included in the Bible? 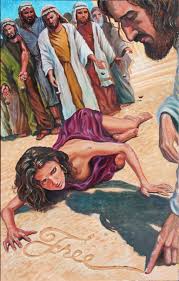 The footnotes in many Bibles will tell you that the account of the woman caught in adultery as recorded in John 8:1-122 were not included in the earliest biblical manuscripts. You’ll find that notation for the ending verses of Mark 16 as well. This is confusing to many new readers of the Bible. What’s that supposed to mean?

Since there was no printing press or OneDrive available, scribes meticulously copied the books of the New Testament. It’s amazing that there aren’t more errors than there are and that scribes were as scrupulous in keeping Scripture intact as they were. The Bible is far more true to its original sources than many contemporary writings from Greek philosophers. The Dead Sea Scrolls proved just how accurate copied manuscripts have remained over the centuries. Yet both Bible scholars and casual readers have been puzzled by John 8. The rule of thumb is that if it wasn’t in the earliest manuscripts which were closer to the time of the event, perhaps they shouldn’t be included.
I believe John 8:1-11 belongs in the Bible. Here’s why.

Contrary to popular belief, not everything gets put on Facebook. Every family has stories, one-liners, catch phrases, and even looks they keep to themselves. No one else would understand those uproariously funny or poignantly sweet moments. It would take too much explaining. All my husband has to do is say, “Underwear!” or “I need some ice cream for my throat” to send me into peals of laughter. He loves to do that to me when we’re in a crowd of people so we can watch the word “What?” write itself across the faces of onlookers.

Some family moments would be embarrassing, humiliating, shameful, or just not appropriate to share with the outside world. Others become all the more precious because only a few people know and treasure the memory. Every couple has those sweet moments of intimate fellowship that they wouldn’t dream of telling anyone. If she told her mother what happened the night before, loving husband wouldn’t be so apt to repeat the sweet moment the next night!

Then there are stories that touch us so deeply, that are so intimate and personal, we can’t bring ourselves to share. Even thirty years later, I can hardly talk over the tears when I remember relinquishing my three week old daughter to a surgical team or the time I believe God sent an angel to rescue me from certain death. The ground is too sacred. Time has worn the jagged emotions and there are moments when others need to hear the stories, but it is still not easy.

I wonder if that’s why the earliest biblical manuscripts chose not to include the story of the woman caught in adultery. John himself said that the world could not contain all the accounts of Jesus’ walk on earth (John 20:30,31; 21:25). The gospel writers were selective in their choice of material to include. Only Luke included the account of Peter walking on the water. I think I understand why. That was a very personal moment between Jesus and Peter. It made the other apostles look bad for not doing it too. It made Peter look bad for failing to trust Jesus midstream. It also could be seen as Peter parading his initial trust in Jesus. At some point, the story still needed to be told.

As a writer, I know my stories, even my blogs go through many revisions. Every novel is a myriad of decisions as I make choices of what to include. The measuring rod for each scene is this: how will this scene, this sentence, advance the plot, character development or spiritual theme of my book? Sometimes, no matter how much I love a particular scene, I might need to make the painful choice to leave it out, confident that the spirit of the story will filter in elsewhere. Then there are times I’ll remove a scene, only to put it back or shift it to a new spot in the story.

The story of the adulterous woman is the epitome of why Jesus came.

I imagine that is what John might have done with the very intimate and uncomfortable story of a woman caught not wearing her underwear and dumped at Jesus’ feet in front of a bunch of hypocritical men who were using her as fish bait.  In all but the most promiscuous cultures, illicit affairs and half naked people walking through the public streets is something polite people just don’t talk about. Frankly, it’s hard to face the scene of men in high level leadership dropping their stones as they publically admit they have sins they’d rather not talk about. Jesus’ private moment at the end with the women who was caught in the act was, well, private, intimate, poignantly sweet, so tender that it’s hard to discuss without a lump forming at the base of your throat.

As time passed and the men who dropped those stones of condemnation died off, I can envision John saying, “Yes, we need to include this story about Jesus.” Why? The adulterous woman, whose story is uncomfortable to describe in public print, is the poster child for God’s grace and forgiveness.

I’m convinced that the Spirit of God motivated men to include that story for every woman—and man—who faces a shameful past. God’s grace extends far enough to cover even those embarrassing moments when the entire world sees the bare and scandalous truth about us. Even after a sin-filled world strips away our protective veneer, Jesus looks at us in our nakedness and still loves us for who we are, in spite of who we are. 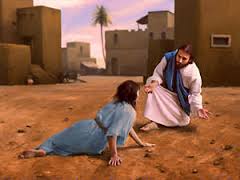 All he asks is that we leave the past and trust Him for the future. When you experience that, it’s a very personal, beautiful, painful moment. Painful because it’s hard to admit we were so far down and so messed up. Personal because someone loved us deep enough to cover us with forgiveness and lift us up to face life anew.

He did it for an exposed woman.

He did it for me.

He’ll do it for you.