WITH FRESH EYES: Winner of the ECPA Christian Book Award and the Selah Award. Get your copy here.
Home / Grace on Parade / Prejudice and The Innocent Man 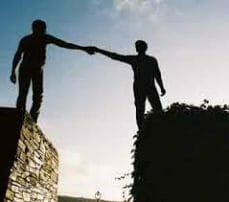 Prejudice comes from somewhere. Prejudice also needs to move on.

The news media reels with reports of victimized African Americans. When Travon Martin, Rodney King, and Michael Brown made front page news, the media trumpeted the outcry of the black community. Tensions over racism have pulled so taut in recent years that Vanessa Sommers, an Indiana congresswoman, accused a co-worker of teaching his eighteen month old child to be afraid of black people.

“He’s scared of me because of my color,” Summers said on April 3, 2015. “I told [the father] you need to introduce your child to some people that are dark-skinned so he will not be scared.”

The perplexed father said the shy child acted that way toward any stranger. “I honestly don’t remember anything out of the ordinary,” Jud McMillin said.

Many people in the non-black community are perplexed too. We’re being told we’re racist when no such thought has ever entered our heads. The Civil War happened over 150 years ago. The Civil Rights movement extended more liberties to people of color fifty years ago. Many whites feel they are treating those of different color like they would any other human being. We are looking on the inside, not the outside, I hear many say. What more do those of a different race want?

Bear with me a few paragraphs. Unless you have been at the shorter end of the stick in other situations, it is difficult to understand how someone who has been discriminated against or victimized might feel. Those with physical limitations, those who have been victimized, or women who have been raped or molested as children might begin to understand the shame, the helplessness and the stripped self-esteem. They resonate with what it’s like to be powerless against the stronger one. The victim vows to never be hurt again. So, in order to not be hurt, a protective hard shell forms around one’s soul. Once burned, twice shy. Psychology calls it transference. I will never let anyone hurt me again, the victim cries.

Worse yet, the hurt and hate is passed to the next generation. And the next. And the next. Until the hate still spews at a generation who has long forgot what the fight was about in the first place.

Billy Joel’s song, “An Innocent Man” talks about the person who fears to trust:

“Some people live with the fear of a touch
And the anger of having been a fool
They will not listen to anyone
So nobody tells them a lie.

I know you’re only protecting yourself
I know you’re thinking of somebody else
Someone who hurt you
But I’m not above
Making up for the love
You’ve been denying you could ever feel
I’m not above doing anything
To restore your faith if I can.

I believe the writer meant those words to describe a woman who has been used and hurt in an abusive relationship. Yet read those words again. Read them from the perspective of someone whose family has been shamed, mistreated, and moved to the back of society for generations.

There are two solutions to the current problem of racism in the United States. And I dare to say it must come from the black community. The answers are trust and forgiveness.

It won’t be easy. It will be a fight, a more bloody painful fight than throwing fists at those who have done no harm. For it will mean cutting out years of misconceptions, lies and destructive attitudes.

“And although this is a fight I can lose
The accused is an innocent man.”

Yes, there have been racists. There have been mean, cruel, evil, power hungry people who have not valued those of a different race, gender, or those with certain physical limitations. But there are a lot of people out who aren’t that way. Don’t generalize. Don’t transfer. I am an innocent man.

“You know you only hurt yourself out of spite
I guess you’d rather be a martyr tonight
That’s your decision
But I’m not below
Anybody I know
If there’s a chance of resurrecting a love
I’m not above going back to the start
To find out where the heartache began.”

Phillip Yancey wrote an article in Christianity Today in the ‘90’s that touched my heart so much, I still remember it to this day. It was during the Balkan Wars. Yancey reviewed the long history of prejudice and hostilities between the Bosnians, Croatians and Serbs. The United States does not have the corner market on prejudice, you see.

Then Yancey said this. I paraphrase because the years have faded my memory. The hostilities would cease if one side stood and said, “I’m sorry, I forgive you, and I will fight no more.”

I believe the same thing applies to anyone who feels oppressed for whatever reason. If you feel the world is out to get you because you are different in some way, forgive me for being harsh. But get over it. Do as Christ commands: Love your enemies and pray for those who wrongfully use you (Matthew 5:44). Deal with the person who has hurt you, not someone whose only crime is that his outward appearance reminds you of the offender. Find white people, physically strong people, men who are willing to love the woman you are. Seek out Christians who follow the biblical injunction to forgive and forbear. Hold your head up high and demonstrate for your fellow sufferers the essence of trust and forgiveness.

For there are many innocent men and women who long to show you God’s grace and acceptance, to take your hand and stand with you on level ground.

“Some people hope for a miracle cure
Some people just accept the world as it is
But I’m not willing to lay down and die
Because I am an innocent man.”

If you who read this have never suffered injustice, I challenge you to reach out to those who have been hurt by evil people or who bear the scars of past generations. Dare to love them. Go back to the start to find out where the heartache began. Dare to love. Have the confidence to be an innocent man.