WITH FRESH EYES: Winner of the ECPA Christian Book Award and the Selah Award. Get your copy here.
Home / Grace on Parade / Christian Persecution: The Cost of Our Faith

Christianity is under attack as violence sweeps across the nation of Egypt, the Washington Times reported recently. Over eighty churches have been damaged already by Muslim extremists.

Violence directed toward Christians is nothing new as I showed in my last post about the massacre of ninety-six “praying Indians” at Gnadenhutten, Ohio in 1781. We’ve long heard of  persecution of Christians in places like China, India and in the Muslim world. While reports like this horrify me, most of the time there is a disconnect in my brain. It would never happen to me – right?

While the violence occurring in Egypt and Syria is sobering enough, the reports of attacks on Christians strikes a closer blow for my husband and me. We are friends with a prominent church leader in Egypt and we have heard nothing yet about his safety.

This isn’t merely a random burning of church buildings either. Attackers are systematically going through towns, painting red X’s on Muslim homes and businesses and black X’s on Christian homes, churches, and businesses.

While I was sitting in the comfort of my own church, I forced my heart to engage with the news. What if this was happening in my own country? Several corollary questions came to my mind.

First, aside from the fact that I am a pastor’s wife, have I lived my life in such a way that the opposition would know I was a Christian?

If they did choose to paint that black X on the side of my home, how would I react?

Would I run and hide?Would I sneak out in the middle of the night and whitewash my wall – or even consider the possibility? 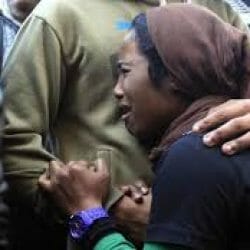 Would I strike back at my accusers – suing them, seeking vengeance, crying foul? Would I be afraid – or would I be at peace, trusting in the One who is more powerful than him who wields a paintbrush?

Would I be ashamed of that black X – or would I bear it proudly?

“Whoever wants to be my disciple must deny themselves, take up their cross and follow me.”

I can’t hardly carry a cross without someone noticing. Would I be willing to bear the cross painted on the side of my house – or on the center of my life?

We often speak of the benefits of the Christian faith – peace, joy, hope, eternal life. But is it worth this? Is it worth being publically marked? Is it worth the fear of losing one’s life and property? The fear of disgrace and social rejection? As another friend, who lives and serves in a country I cannot mention because he is in great danger, says, “Yes. It’s worth it.”

As Jim Elliot, a missionary to Ecquador, said before he was speared to death by the people he tried to save, “He is no fool who gives what he cannot keep to gain what he cannot lose.”

What about you? If you were in Egypt, what would you do?

Or does it?  Maybe not like that. But it still happens.

When it does threaten, will I wear the name of Christ proudly? Will I bear the cross with joy? Is it worth it to me?  How much is it worth it?

“In fact, everyone who wants to live a godly life in Christ Jesus will be persecuted.”

What would I – and you – be truly willing to give up to bear the mark of Christ on our lives?