WITH FRESH EYES: Winner of the ECPA Christian Book Award and the Selah Award. Get your copy here.
Home / Grace on Parade / God Bless America 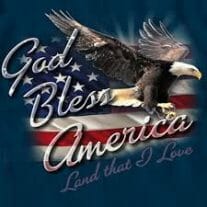 There are many who would say, “No.” Secularists want us to remove the word God or even more so, the word Jesus from any public verbiage. On the other side of the spectrum, some Christians contend that to sing this song is to spit in God’s face. To ask for His blessing when we have shown God the door and shut it behind him, do we dare ask for the physical blessings of wealth, prosperity and lives of ease?

Retired Petty Officer Generald Wilson, who sang a beautiful rendition of this long-loved song on Fox and Friends this past Veteran’s Day, would say yes as well. Before he sang, he acknowledged that he views the song as a prayer to God. 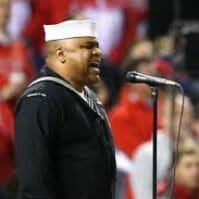 Irving Berlin, who penned the words at the end of World War 1 in 1918 and revised them on the eve of World War Two for Kate Smith to sing in 1938, would probably say yes as well.

It’s all in how you understand the word “bless.” This word is not asking for health, wealth and an easy, peaceful life. In the original language of the New Testament, the Greek word for “bless” means content or happy. But the meaning carries the reason behind that contentment. Being blessed is a feeling of being centered and secure because we know we stand approved by God, in the center of His will. Those who ask for God’s blessings know they don’t deserve them. They know they are weak. The very first Beatitude, “blessed are the poor in spirit,” immediately asserts that I am spiritually bankrupted, I don’t have what I need, there’s no way I can get it on my own power, and I need God’s help and guidance to make it through this life. 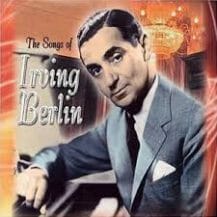 Both the time era when this song was written and the context of the words suggest Irving Berlin had this in mind. What darker time could there be than the midst of global warfare? Yes, they needed God. The world was in a pickle and only God could help.
That is what Irving Berlin was asking for. That’s what we desperately need to ask God for today.

“Stand beside her and guide her through the night with the light from above.”

A Wikipedia article says that Berlin originally wrote the above phrase as “to the right with the light from above.” He changed it before Kate Smith sang it because he was concerned some people would think he meant to a political right rather than the right of Truth.

Berlin included this seldom sung verse to the song:

“While the storm clouds gather far across the sea,
Let us swear allegiance to a land that’s free,
Let us all be grateful for a land so fair,
As we raise our voices in a solemn prayer.”

“God Bless America” expresses a humble gratitude for what we do have and an equally humble request for guidance we don’t deserve. Isn’t that something any of us want from God? Do any of us deserve His blessings – material or spiritual? Do we deserve His approval? And yet, isn’t that what we crave most? Isn’t that — grace?

If I have the humility and courage to ask God to bless and guide me – shouldn’t I be willing to ask that for my country as well?

Maybe that’s why the secularists would rather not sing “God Bless America.” It’s hard to admit our country can’t survive and succeed through our own power and strength. After all, we don’t want to appear weak, do we?

Yes, I don’t mind joining Wilson and others. This Veteran’s Day and any other day, I gladly sing “God Bless America.” Because we need the blessings and guidance of God Almighty, starting with me.

I don’t mind asking God for His favor, blessing and guidance for my country. Tweet this