WITH FRESH EYES: Winner of the ECPA Christian Book Award and the Selah Award. Get your copy here.
Home / Grace on Parade / Quest With Team Expansion

Have you ever been on a quest?

One online dictionary defines the word quest as a lng or arduous search for something. That’s a great way to describe the apprenticeship program of the mission organization, Team Expansion. 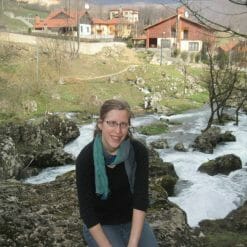 Our daughter went on a quest last year to a country in Eastern Europe. Through the Quest program, a year-long apprenticeship under the auspices of the mission organization, Team Expansion, Christine had the opportunity to search out how God might use her life to bring Christ to an unreached people group. In that year, Christine discovered the extraordinary grace of God hidden in the everyday folds of the ordinary.

This week, I’ve invited Christine to share her experience with Team Expansion and what she learned about parading God’s grace to a culture other than her own.

Describe the Quest program to the Grace on Parade readers.

“Quest is a 6-18 month apprenticeship that places young adults with teams of experienced missionaries in various fields. The apprentices are mentored during that time and actively participate in the everyday work of the missionary team, gaining a taste of what missionary life in another country.”

Describe some of the blessings and challenges in joining a global workers team.

“It’s a blessing to join with a team in which everyone has a common, divinely ordained  purpose. That being said, the challenge often is operating with only that team and having no larger church community to fall back on.  The sense of isolation can be pretty difficult, and the work is often tedious, even mundane, with sporadic results.”

What were some challenges in acclimating yourself to a new culture? 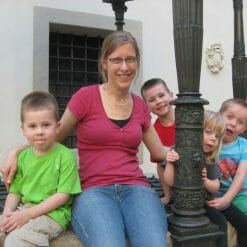 “The most obvious challenge is learning the language and cultural customs. I had to learn to ask for help, allow myself to make mistakes, and just keep going each day, even on days when it felt like I should have just stayed home in America.”

What new lessons did you learn about God’s grace or about extending God’s grace to others – your co-workers or the people you came to serve?

“Grace was an absolutely crucial part of the journey! Ministry, especially ministry in a completely foreign context, has a way of exposing who we really are—all our flaws, doubts, and weaknesses. I learned to acknowledge those in myself but also learned about the grace God had given me in spite of them. I learned to keep giving myself grace, too.

Grace also had to be a key part of the team effort. It wasn’t just my weaknesses that showed: any time you have a small group working so closely, it exposes everyone’s ticks, peeves, and idiosyncrasies. We just had to learn to put up with each other, communicate when things weren’t going well rather than just suppressing problems, and extend grace no matter what.”

What was the greatest source of encouragement for you while you lived overseas?  How can believers be most supportive to mission interns and long term mission workers?

“Every bit of contact with “home” was an encouragement. When people think of supporting missionaries, it’s easy to just think of financial support. That is necessary, of course, but they don’t realize how much prayer and emotional support is needed.  What meant the most was the emails, Facebook messages, Skype calls, cards, and care packages. These reminded me that even when I felt alone, I had a lot of people cheering (and praying!) me on from afar. That helped give me the strength and courage to keep going. Prayer, too, is an incredible part of it—I sent prayer updates to my supporters during my Quest, and it was great at the end to look back and see just how many of those prayers were answered!”

Describe something that gave you a sense of satisfaction or fulfillment during your Quest experience.

“It was heartening to find ways to engage people in spiritual conversations. Yes, missionaries are there to “preach the Gospel,” but often there’s a lot of work to be done before we can even accomplish that. One of those is just finding people who are open and willing to listen. I had several great conversations in my last month with a few college students. One of the best moments was when a student then expressed interest in reading the Bible for herself. I had to leave a few weeks later, but I got to give her my own Bible that I’d carried the whole time. That was an incredible moment—to be able to pass on the Word of God.”

The Team Expansion family currently consists of more than 340 full-time adult workers serving in 46 countries in 70 distinct church planting projects. So far they have seen God use their efforts to plant over 350 churches, with over 12,400 individuals baptized into Christ – more than 800 baptisms in 2011 alone! But to accomplish that, many workers spend ordinary days, faithfully serving God in spite of the loneliness, lack of encouragement, relationship obstacles and lack of results.

That’s what quests are like.  You don’t find what you are searching for every day.  Often, the long arduous search includes a string of days of boring, mundane and sometimes difficult challenges that make you wish you had stayed at home.  In the words of Amy Carmichael, “Practical missionary life is an unexciting thing. It is not sparkling all over with incident. It is very prosaic at times.”

If your quest is to search out ways to reveal Christ to the nations – whether those across the world or across the street, be prepared!  There will be many ordinary days, many days you feel all alone, days when Satan throws everything at you.  You are not alone. God calls you to be faithful – both in the extraordinary and the ordinary. If you hang in there, the day may come near the end of your quest where you are able to hand over your guidebook to someone else who wants to join your quest – just like Christine.

Know any cross-cultural Jesus helpers?  Let them know you are praying for them.

Know any young people on their own personal quest to find their slot in Kingdom work?  They need your prayers too.

If you want to know more about the ministry of Team Expansion, click here.

Ministry has a way of exposing who we really are. Tweet this.

Grace has to be a key part of any team effort. Tweet this.

What could other bloggers possibly write about starting with the letter Q/ Check below for this week’s A to Z meme.