WITH FRESH EYES: Winner of the ECPA Christian Book Award and the Selah Award. Get your copy here.
Home / Grace on Parade / The Pastor’s Wife Wears What???

Grace on Parade loves to showcase how God’s people reflect the grace of God to a watching and hurting world. Sometimes that calling may challenge us to be extra creative in our grace extensions, even stepping into the extreme so the world will sit up and take notice. Sometimes, that may stretch us beyond our comfort zones. 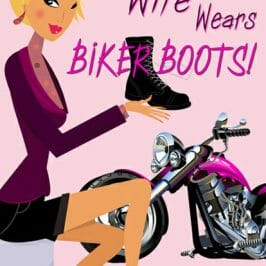 My friend, Karla Akins, has written a delightful novel about one pastor’s wife who did step beyond the expected and what happened when she did. The title tells it all: “The Pastor’s Wife Wears Biker Boots.” Karla took time from her busy schedule as a minister’s wife, mom and caregiver to her mother-in-law to answer a few questions about her book.

Give us a snapshot of “Pastor’s Wife.”

“This book is about a pastor’s wife who fulfills a life-long dream she’s had of riding her own motorcycle. But when she does so, some of the leaders in the church get upset. However, because she steps out of her church bubble, she’s able to reach a lot of people she’d not otherwise reach.”

Tell us about the main character or characters.

“Kirstie Donovan is a pastor’s wife and mother of three boys. Her oldest has autism, her second son is a prodigal and her youngest is a violinist. Her husband, Donovan, is bookish and completely devoted to his little church. Kirstie’s riding friends are Reba, a gum-smacking redhead, Opal, a retired church secretary and Lily, a nurse whose husband has Alzheimer’s.”

How did you come up with the idea for this book?

“I’m a pastor’s wife and I ride my own motorcycle. I thought it would be fun to write about some of the hilarious situations I myself have found myself in from time to time. But the book isn’t autobiographical. I just drew on my own experiences.”

What do you hope your book will accomplish in the lives of your readers?

“I really hope that pastors’ wives and preachers’ kids will feel less alone. I hope people will see that everyone is in need of a savior and that we shouldn’t judge people for what’s on the outside. I hope it will encourage people to look outside the church walls and tell others about Jesus.”

True reveal, are you fond of motorcycles?

“Oh yes. Love motorcycles. But I’d rather ride an Indian than a Harley. Don’t tell my husband! He rides a Harley. I can’t afford an Indian yet (nor a Harley) so I ride a Suzuki Intruder. It’s perfect for me, though. I’ve thought about getting something different but I think I’m just going to give it a new paint job (purple metal flake!) and hang on to it. We’ve been down a lot of roads together.”

How is God’s grace shown in “Pastor’s Wife?”

“What’s remarkable about the book is that the bikers actually show more grace than the “church folks.” I wanted to bring that home to my readers. Bikers are some of the nicest people you’ll ever meet and they really have each other’s backs. It’s not always that way among Christians at least in my experience in the United States. We have a lot to learn still about bearing one another’s burdens.”

How does Kirstie experience grace?

“She learns to love people who are hard to love, and how to bite her tongue. She experience grace as she cares for her son with autism. Caring for children with special needs requires a ton of grace and we can’t do it without God’s mercy. I know because I’m a mom with twins who have autism. And she experiences her deep love for her son who is a prodigal and the grace she pours out on him. It’s a real picture of how Jesus is toward us.”

This book could become a series! I can imagine pastor’s wives filling in the blank: “The Pastor’s Wife _____” Why is it important for pastor’s wives to become their own person instead of squeezing themselves into the expected traditional norms? What are the downfalls of “doing your own thing?”

“Because we’re individuals and not a “role.” We’re human “beings” not human “doings.” Not all pastor’s wives are the same. We don’t have the same skills or calling. I tried being everything people wanted me to be and I was miserable. I do so much better now that I’m doing what God’s called me to do.”

Grace on Parade likes to feature creative ministries and reaching out to biker groups is certainly creative. Why do churches and individual Christians need to think outside the coloring lines when it comes to ministry, serving others, evangelism, or other forms of outreach?

“Because as never before people are starving spiritually. They’re tired of traditions and oppressive rules that have nothing to do with the power and love of God. They need to know how much God loves them, that His grace is sooooo available, that they aren’t what anyone says they are but what God says they are. They need the hope that only Jesus can give. I like to tell people that I don’t follow rules, I follow Jesus. While Christians are bickering over the church budget or color of the carpet, people are dying without the promise of eternal life. That is serious stuff. It’s time for the church to stop focusing on themselves and reach out, don’t you think?”