WITH FRESH EYES: Winner of the ECPA Christian Book Award and the Selah Award. Get your copy here.
Home / Grace on Parade / Grandpa Showed Us It’s Never Too Late

The first person I ever heard cuss was my grandpa. 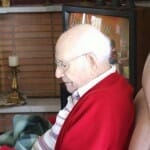 His favorite cuss word was the name of the Lord I was growing to love.  He would only swear, however, when he was angry and when he spewed, we learned to keep quiet with our eyes averted and our heads bowed.  In kinder moments, his favorite expression was, “This is so ridiculous, it would make a preacher cuss.”  As a child, my eyes grew wide and round as I tired to contemplate what must be so awful that it would make my beloved minister, Carl Anderson, spew like Grandpa.

I didn’t understand why Grandpa lost his temper so easily.  Nor did I understand why he wouldn’t go to church whenever I visited him and my grandma at the small motel they owned and operated in Southern Arizona.  Instead, I would trail Grandpa from room to room on a Sunday morning, picking up glasses and checking maintenance problems.  His mother, my great-grandmother Flossy, was devoted to Jesus and so were Grandpa’s five younger brothers and sisters.  As I grew older, I pieced together snippets of family lore.  My great grandparents were founding members of the Tempe Arizona Christian Church, a church that broke off from the Disciples of Christ movement in the mid 1920’s.  Grandpa, an older teenager at the time, became disgusted with the in-fighting, and turned his back on the church and the God of his fathers.

In my teen years, a Bible, the Living Bible translation, appeared on my grandparents’ end table.  Whenever my Uncle Ron, a minister, was in town, Grandpa would tell of things he had read and didn’t understand.  In my corner, I noticed my grandmother left the room during these discussions, muttering that she didn’t want to have anything to do with that talk about God and church. 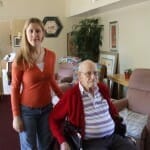 When my sister and I both admitted to our grandparents that we wanted to attend Bible college in different states, our grandparents freely expressed their opinions about our poor life choice, then offered to drive us to college.  They were good people, hard working, financially conservative people, moral, honest people.  They cared deeply about us and wanted to make sure we were settled and financially secure. They just didn’t want to have anything to do with God.

So they family prayed.  And Grandpa kept reading his Living Bible.  He kept asking Uncle Ron questions. Then Grandma died of pancreatic cancer at age 81.  We mourned her loss, wondered about her eternal destiny, left that decision up to our Lord, and turned to comfort Grandpa who continued to ask his questions.

“I just don’t get this cross thing,” he said three years after Grandma died when he was 86 years young.

“Mervin,” Uncle Ron said.  “I’ve told you and I’ve told you over the years.  I don’t know how else I can explain it to you.  I don’t know how anymore.  You are just going to have to figure it out yourself and accept it on faith.  And when you are ready, call me.  I’ll come back and help you through accepting Christ as your Lord.”  With that, Uncle Ron packed up, left Arizona and returned to his home in Kansas, frustrated, sad, even a bit defeated, and still praying.

Three weeks later, Grandpa called him.  “I’m ready,” he said.  The miles seemed too long as Uncle Ron and Aunt Evelyn hastened back to Arizona.

One of the most beautiful parts of my grandfather’s baptismal service, another aunt told me later, was hearing the man who had for so many years used the name of Jesus Christ as a swear word now confess that name as Lord and Savior. The man who refused to go to church with his granddaughter now became annoyed when he couldn’t go to church.  The day before he died, when his minister came to visit him, Grandpa, weak from useless blood transfusions, apologized for not being in church the last few Sundays.  “I guess I’ve let you down,” he told the preacher.

While in his final months, Grandpa reached back to his childhood and repeated the few Scriptures he knew.  He insisted that the workers at the nursing home pray the Lord’s Prayer each night with him before he went to sleep.  The night aids, embarrassed that they didn’t know the words, bought a poster with the Lord’s Prayer and hung it above Grandpa’s bed so whoever was responsible for putting Grandpa to bed could use it as a guide when Grandpa made his nightly request.

Grandpa was 86 when he was baptized, proving to all of us that it is never too late within the span of this earthly life to accept the grace of Christ.

No matter what you have done.  No matter how old you are. No matter long you have stayed away.  It’s never too late.