WITH FRESH EYES: Winner of the ECPA Christian Book Award and the Selah Award. Get your copy here.
Home / Grace on Parade / Update On My Mother

Thank you so much to those of you who have been praying for my mother.

Last week, Mom underwent brain shunt surgery. Afterwards, the surgeon told us all went well and Mom “would be dancing by tomorrow.” Mom was alert but sluggish the rest of the day, normal for what one would expect of someone who has just had major surgery.

Then her post-operative care took a direction we did not anticipate.

An occupational therapist and physical therapist assessed her the next morning and determined she was not ready to function in her own independent living apartment. Yet the hospital wanted her out of there asap. Couldn’t she just stay another day, we asked? No, too much chance of infection, we were told. We needed to find a skilled nursing facility that offered rehab. There are 30-50 such places in the city, the hospital administration said. I’m sure they meant that to be comforting, but to our family, it was overwhelming. All of us lived out of town and had no clue of where to begin.

We left the room, called several prayer warriors, then came back to Mom’s room. By that time, my mother’s case manager had printed a four page list of Medicare rated facilities. My sister and I quickly narrowed the list to two, the hospital called our first choice, and, after a two hour wait, the facility agreed to admit Mom. I’m still praising God that on our own, my sister and I both chose the exact same top two choices.  For the most part, we are still very pleased with the rehab center we chose. 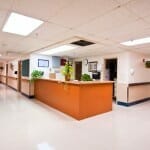 After Mom’s hospital dismissal, we drove her to a rehab facility we had not even been given time to check out. That was hard.  Talk about going on faith.  I think it’s easier to have faith in a God I have not seen than a nursing facility I have not seen.  I had to trust that God knew even if I didn’t know.

Walking into a skilled nursing facility is like being dumped into a foreign culture with no or little introduction to the culture or language beforehand. As a minister’s wife who had spent many moments in hospitals and nursing homes, I had heard the language and could speak some simple phrases. I knew others who had visited this foreign country before. I thought I knew a lot. I thought I sympathized with the frustrations many felt. Yet it was not until I wheeled my own mother through the doors that I realized I had no more education than a first-year Spanish student, that immersion was far different than tourism. Just like being dropped into a foreign country, the simplest of tasks, like going to the bathroom, became complicated. My preconceived ideas of when, where, how, and how long to wait to use the bathroom had to be programmed not according to my or my mother’s convenience or expectations, but according to the pecking order of the community based on snap decisions of the workers who may or may not care about her as an individual. It was only the first of several incidents that revealed we had to look at all of life at a slower pace, that my mother’s daily living choices no longer impacted only her, that independence and privacy were unknown words, that she was no longer mistress of her moments.

I still choke up when I remember how she looked at me and said, “Just for the record, I don’t like this very much” and I had to honestly respond, “I don’t like it either.” Then I told her, “The purpose of being here is to get out of here. You need to work hard to get out of this place if you want to go home.” The next time I saw how a nurse’s aide needed to lift her out of bed because she was so unstable, I wondered how I could be so brutal – yet so accurate. 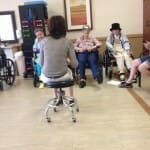 Even though I was entrusting my mother’s health care to people who were far more expert than I was, I still felt like I was abandoning her. I felt so ill equipped to make quality of life decisions based on so little information.

Then I thought about Joshua.

God gave Joshua the ginormous task of leading the people of Israel into a foreign country, to conquer the enemy, to settle and cultivate the land, and to prosper.

And God told Joshua this:

“Have I not commanded you? Be strong and courageous. Do not be terrified; do not be discouraged for the Lord your God will be with you wherever you go (Joshua 1:9).”

Did you catch those last three words? Wherever you go.

God’s presence with us is a theme that laces itself through Scripture. What my mother is encountering is a cake walk compared to the journeys some people must take. Yet Psalm 23:4 says, “Even though I walk through the valley of the shadow of death, I will fear no evil, for you are with me; your rod and your staff, they comfort me.” Even though our life journey might meander through a narrow canyon with potential, life-threatening danger peering over every cliff, we don’t have to be afraid. God is with us wherever we go.

Do you feel like you’ve been snatched out of your comfort zone and placed in what feels like a foreign land? New job, nursing home, a daughter who tells you she is pregnant, a conflict with government regulations, an audit, the prospect of bankruptcy? In the middle of a neighborhood or school where few confess and most scoff at the name of Jesus? Or perhaps like so many baby boomers, an aging parent caught in the quagmire of a corrupt and corrosive health care system?

God is with you wherever you go. Even in nursing homes.

What foreign land do you face?  How has God proven faithful to you?