WITH FRESH EYES: Winner of the ECPA Christian Book Award and the Selah Award. Get your copy here.
Home / Grace on Parade / Marriage and Kitchen Dish Towels

Tired of the creeping clutter in my house, I decided to redeem my evening hours by cleaning out the kitchen drawer that held more dishtowels and dish cloths than I care to admit I’ve kept. With ten dishcloths stuffing the right side of the drawer, there’s really no reason to keep string-riven and hole-filled dishcloths! I threw out four and kept six. 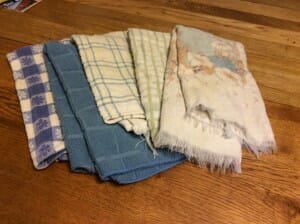 Next I tackled the dishtowels. Remember the contests in the 1960’s of how many people college students could stuff in a Volkswagen Beetle? I think my 21st century version was how many dishtowels I can stuff in a kitchen drawer. Please don’t ask how many; let’s just say there was a lot!

As I started a third stack of towels on the kitchen table, I held up one for my husband’s inspection. “This one was a wedding present,” I remarked. It was faded by countless washing machine cycles, softened by years of washing dishes together, and stained from resting over fresh baked bread and bowls of rising bread dough.

Jack laughed a deserved laugh. “I think after 30 years of marriage, you can throw it away.”

He was right. Sometimes it’s ok to let things go and replace them with new.

He left and I continued to ponder my dishtowel. That towel is like my marriage. It bears the stains of life events:  some good, some bad. The thin spots tell stories of the times circumstances threatened to rip us apart, but we held strong. It’s worn and softened by age, like both of us. Now old enough to request McDonald’s Seniors coffee, we’re both starting to fade. My husband’s hair is thinning and I’m wearying of trying to cover the gray. We have joints that creak and ache and refuse to move when we want them to. We don’t have the vitality or physical passion we used to, yes, sometimes we feel worn out like a limp dish towel. There are moments when he can’t remember where he put something and I can’t see to help him find it.

Our culture is used to brand spanking new. We don’t even want to wait for something to break; instead, we replace it before it breaks so we won’t have to do without. A new and updated model comes out so we do a trade-in.

We don’t do that with marriage. At least we shouldn’t. Marriages are stained with mistakes and memories and stretched till you think you might break. The years may have been harsh but like an old towel, they’ve softened us and wrapped us in compassion for the other person. We wouldn’t trade those stains for anything because they show we’ve lived and faced life with someone at our side. We’ve gained the courage to reveal our fragility to the other and found that God’s brand of grace and acceptance is a key ingredient in marriage. As someone once said, marriage partners become expert at the art of forgiving.

I put my towel back in the drawer. It’s a reminder that like my dishtowel, my marriage has worn the years well.