WITH FRESH EYES: Winner of the ECPA Christian Book Award and the Selah Award. Get your copy here.
Home / Grace on Parade / Uncle Eldon: The Man Behind the WW2 Veteran
I had trouble thinking up a word for this week’s A to Z meme letter, the letter U.  Late one night, an idea came to me and it was like, duh, of course

U is for Uncle Eldon. 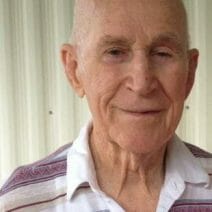 Uncle Eldon and his wife, Aunt Charlotte, are two of my very favorite people.  I have so many precious memories of them, it’s hard to know where to begin.

Uncle Eldon is a veteran of World War Two.  He served as part of the clean-up forces who swept across France toward the Ardennes region of Belgium after D Day in Normandy.  December, 1944 and the Germans found him on the edges of the Battle of the Bulge.  A bullet lodged in his upper temple, and the Germans took him prisoner where he stayed in a German POW hospital until the Allied Forces and the Red Cross freed him in April 1945.

Over the years, Uncle Eldon never talked much about his experience.  Every once in awhile, including several hours I spent with him in 2002, dribs and drabs about his experience would trickle out.  After an unusual prolific outpouring that late evening in 2002, Uncle Eldon paused and said, “I’ve told you things I’ve never told anyone.  I should have done it long ago.”

After moments like that, the family has had to huddle together and compare notes.  My younger daughter said he told her how he found comfort in the words from the old hymn, “In the Garden:”

“I come to the garden alone
Where the dew is still on the roses
And the voice I hear, falling on my ear
The Son of God discloses
And He walks with me and He talks with me
And He tells me I am His own.
And the joy we share as we tarry there
None other has ever known.”

I have never liked that hymn.  Please do not sing or play it at my funeral. I have always wondered, what is it saying anyway?  But when I heard that these words sustained my Uncle Eldon through a scary – no, scary doesn’t even begin to express it – time in his life, the words took on a whole new meaning.

The Germans did not give him good care and by the time the Red Cross got to him, it was determined the bullet could not be removed from his skull.  We’re talking 1940’s medicine here.  Only recently, family members told me Uncle Eldon came back to the States unable to talk at all.  I always wondered why Uncle Eldon spoke slowly and deliberately as if he was struggling to keep from stuttering.  Now I know why. After doing some research for a character in one of my novels who suffers a gunshot wound to the head, it’s amazing that Uncle Eldon talks and functions as well as he has, for that matter that he is even alive.  Even with today’s medical advances, most people don’t survive gunshots wounds unless they are attended in the first two hours after being shot.

Before Uncle Eldon left for the war, he met a young lady in Baltimore at a USO dance.  She wrote to him while he was on the battlefront; in fact, if my memory is correct, her letters were found by his squad after he had been captured. His commanding officer wrote Aunt Charlotte to tell her Eldon was missing in action.  As soon as Eldon came home, he wanted to visit Charlotte and take her back to Phoenix and his family farm.  They married in November, 1946 and Charlotte left everything she had ever know to follow Eldon to the foreign land of Arizona.  Isn’t that romantic?

Uncle Eldon has suffered frequent headaches from his bullet wound, especially on bad weather days.  In spite of his war experience, the struggle with speech, and the constant pain, he is one of the most joyful people I know.  No wonder “Blessed Assurance” is one of his favorite hymns:

“Blessed assurance, Jesus is mine.
Oh what a foretaste of glory divine
Heir of salvation, purchase of God.
Born of His Spirit, washed in His blood.
This is my story, this is my song
Praising my Savior all the day long!”

When I told Uncle Eldon my oldest daughter was joining the Army as part of the medical corps, I fully expected him to say what so many had already said to us, “What do you think you are doing to that child?  She might get sent to Afghanistan or Iraq.”  Instead, in his slow deliberate way, he said, “Tell her to have fun and don’t be afraid.  She’ll do fine.”  This from a man who knew what there was to be afraid of.  Only someone who knew that Jesus walks and talks with him in earth’s most hellish halls yet can still praise Him “all the day long,” could say something like that.

Uncle Eldon now suffers from Alzheimer’s. We see the man we love slipping away from us day by day.  He and I share a lifelong joke that is only between the two of us.  Those inside the family know I’m Uncle Eldon’s “headache girl.”  More and more, we are having to prompt him through the script he and I have followed for years, but I’m still his “headache girl.” In spite of his fading memory, Uncle Eldon can still sing the words of “You Are My Sunshine” and “Blessed Assurance.” One day in a more lucid moment, he and I were giving Aunt Charlotte grief.  Impulsively I said, “Oh Uncle Eldon, isn’t heaven going to be wonderful?” He smiled his characteristic huge grin and said, “Oh yes it is!”

Uncle Eldon is celebrating his 90th birthday on December 22nd.  He and Aunt Charlotte have traveled all over the world, collecting friends wherever they go.  I know it would please them no end for Uncle Eldon to receive birthday wishes from all of you.  Leave your birthday greetings to Uncle Eldon in the comments section below and I will be sure he gets your good wishes.

Previous Post: « Seven Facts About Christmas That Will Make You Smile
Next Post: Tamera Lynn Kraft: How Marbles Changed Christmas »